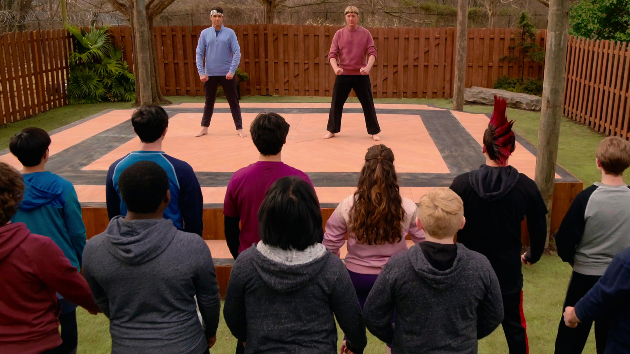 As Hurwitz tells Entertainment Weekly, he’s been trying to use the AC/DC classic “Thunderstruck” in the Karate Kid sequel series for some time now. In fact, “Thunderstruck” was specifically written into a script for a montage season in the recently premiered fourth season of the show.

“We’ve written ‘Thunderstruck’ into the script several times over the years,” Hurwitz shares. “We’ve never been able to afford it in that moment or to make that choice [to spend the money on it] right now.”

“Our fantasy is having the kind of music budget that would allow for us to have nonstop AC/DC and Bon Jovi and Guns N’ Roses,” he adds.

While viewers have yet to hear “Thunderstruck” soundtrack any epic Cobra Kai karate showdowns, the show does feature a lot of Karate Kid-era appropriate rock music, including Mötley Crüe, Poison and Ratt.

“[Music supervisor] Michelle Johnson has done an amazing job, she’s been phenomenal in understanding the tone of the show,” says Hurwitz. “She’ll pitch us many, many songs or send music to our editors and we’ll narrow it down. There’s nothing we love more than finding the right song for a montage.”

Cobra Kai season 4 also featured a wink to metalheads in an episode when a neighbor of the character Stingray yells at him for “blaring s***ty Metallica all night.” Stingray, who’s played by Richard Jewell star Paul Walter Hauser, then replies, “That was actually Exodus‘ Bonded by Blood, but it’s not your fault, you don’t know the genre.”