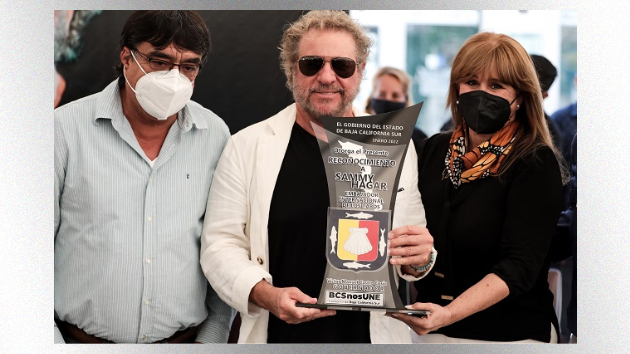 Sammy Hagar was awarded the title of Honorary Ambassador of Mexico’s Los Cabos municipality on Wednesday at a ceremony held in the town of San Jose del Cabo, not far from where the Red Rocker’s Cabo Wabo Cantina venue is located.

During the event, Hagar was presented with the municipality’s first Medal of Honor, which was created to recognize people who have made extraordinary contributions to the development and promotion of Los Cabos and Mexico’s economic growth.

Hagar is a longtime resident of Los Cabos, and his Cabo Wabo Cantina, where he usually stages his star-studded annual birthday bash, has brought many tourists to the area. In addition, Sammy’s hugely successful Cabo Wabo Tequila and Santo Tequila liquor brands also have helped boost the local economy.

“Being honored for anything in Los Cabos is the same for me as being honored in my hometown, because I feel this is my hometown and has been since the early ’80s,” Hagar said at the ceremony. “I will treasure this award [and]…will continue to do my part in bringing this, one of the most beautiful places in the world, to the rest of the world, as your new ambassador of tourism.”

Sammy was joined by his wife, Kari, at the event, which also was attended by various local politicians and officials, including Los Cabos’ municipal president, Oscar Leggs Castro.

Castro said at the ceremony, “Mr. Hagar has long been the unofficial ambassador to Los Cabos and through this designation we look forward to strengthening our tourism brand by leveraging his national and global appeal to promote Los Cabos throughout the world.”

After the ceremony, Hagar treated select local fans to a performance at Cabo Wabo Cantina.