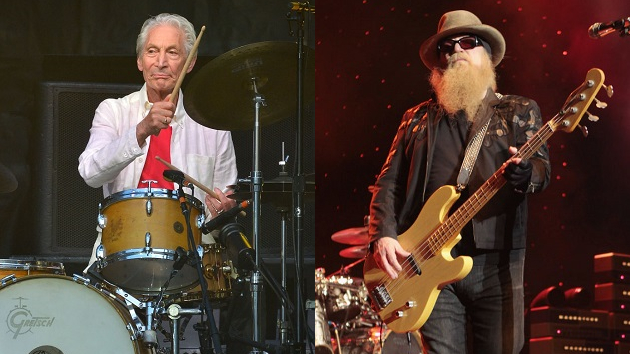 The music world said goodbye to many influential and beloved artists in 2021, including two Rock & Roll Hall Fame inductees who both spent more than a half century with their respective bands.

On August 24, Rolling Stones drummer Charlie Watts died at the age of 80. Watts played his first show with the band in February 1963 and went on to keep the beat for the British rock legends for more than 58 years. Shortly before his death, it was announced that Watts had undergone a medical procedure that would likely force him to miss the Stones planned 2021 U.S. tour. Veteran session drummer Steve Jordan was handpicked by Charlie to step in for him on the trek.

Less than a month before Watts’ death, on July 28, ZZ Top bassist Dusty Hill passed away at his home in Houston at age 72. Hill joined the legendary Texas trio in 1970, shortly after the band’s formation. At the time of his death, Hill was forced to take a break from the band’s 50th anniversary tour to attend to a medical issue with his hip. ZZ Top’s longtime guitar tech, Elwood Francis, had been tapped to fill in for Dusty, and he’s has continued to play bass with the group.

Here are many of the music figures who died in 2021, in chronological order:

Gerry Marsden — January 3 — Frontman of popular Liverpool, U.K., band Gerry and the Pacemakers. Died of a heart infection at age 78.

Michael Fonfara — January 8 — Keyboardist for The Electric Flag and Rhinoceros, also played on many Lou Reed albums. Died after a long battle with cancer at age 74.

Phil Spector — January 16 — Influential producer known for his “Wall of Sound” recording technique. Convicted of shooting and killing actress Lana Clarkson at his California mansion in 2003. Died of natural causes at age 81 while serving a 19-year prison sentence.

Gene Taylor — February 20 — Boogie-woogie piano player who played with Canned Heat, The Blasters, The Fabulous Thunderbirds and other artists. Died at age 68.

Gary Corbett — July 14 — Keyboardist and songwriter who toured with KISS and Cinderella, co-wrote the Cyndi Lauper hit “She Bop.” Died of lung cancer.

John “Hutch” Hutchinson — July 25 — British guitarist who played with David Bowie during the early years of Bowie’s career. Died after a long illness.

Joey Jordison — July 26 — Founding drummer of Slipknot and co-writer of many of the popular metal band’s best-known songs. Died in his sleep at age 46.

Dusty Hill — July 28 — Bassist, singer and songwriter for Rock & Roll Hall of Fame inductees ZZ Top for more than 50 years. Died at his home in Houston at age 72.

Don Everly — August 21 — With his brother Phil, one half of the pioneering rock ‘n’ roll duo The Everly Brothers, among the first artists to be inducted into the Rock & Roll Hall of Fame. Died at his home in Nashville at age 84.

Charlie Watts — August 24 –Drummer for the iconic British rock band The Rolling Stones from February 1963 until his passing. Died at age 80.

Lee “Scratch” Perry — August 29 — Jamaican singer and producer hailed for breaking boundaries for reggae and dub music during the ’60s and ’70s. Died of an unspecified illness at age 85.

Pee Wee Ellis — September 23 — Saxophonist, composer and arranger who played and collaborated with James Brown, Van Morrison, Ginger Baker and many others. Died from complications with his heart at age 80.

Everett Morton — October 8 — Drummer for the British ska band The Beat, known as The English Beat in the U.S. Died at age 71.

Robbie Shakespeare — December 8 — acclaimed reggae bassist who with Sly Dunbar made up the influential and prolific rhythm section and production team Sly and Robbie. Died following kidney surgery at age 68.

Michael Nesmith — December 10 — Member of The Monkees, also pioneered country-rock as a solo artist and with his backing group The First National Band. Died of natural causes at age 78.

Ken Kragen — December 14 — Music manager and producer who helped organize the recording of “We Are the World.” Died of natural causes at age 85.

Phil Chen — December 14 — Veteran bassist who worked with Rod Stewart, Jeff Beck, members of The Doors and many others. Died at age 75 after a long battle with cancer.