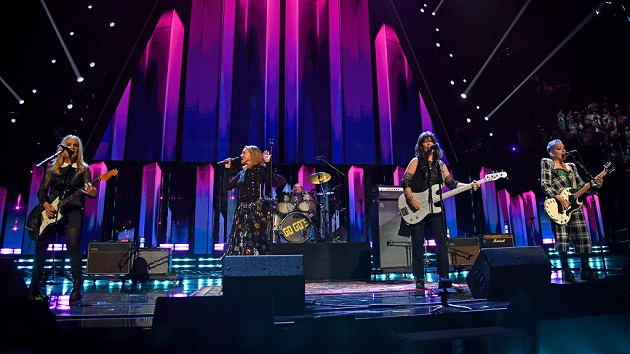 The Go-Go’s had five West Coast concerts scheduled for this week and next, spanning from a December 28 show in San Francisco through a January 3 performance in San Diego, but all of the events have been postponed because a member of the band’s team recently tested positive for COVID-19.

A message from The Go-Go’s announcing the unfortunate news explains, “ALTHOUGH WE ARE, OF COURSE, VERY DISAPPOINTED, we will be following proper protocols and postponing our upcoming west coast dates.”

The band adds, “We will be announcing new dates VERY soon and look forward to getting back to performing and celebrating with everyone. WISHING EVERYONE A WONDERFUL AND SAFE HOLIDAY SEASON, AND SEE YOU IN THE NEW YEAR!”

The three other postponed concerts were scheduled for tonight, December 29, in Los Angeles, and on New Year’s Eve and New Year’s Day in Las Vegas.

The Go-Go’s were inducted into the Rock & Roll Hall of Fame on October 30 in Cleveland and performed a three-song set at the ceremony. They also played a special club show on December 14 the the Whisky a Go Go in West Hollywood, California.

The band’s next scheduled concerts will take place this June, when the group will serve as Billy Idol‘s opening act at a series of U.K. shows.