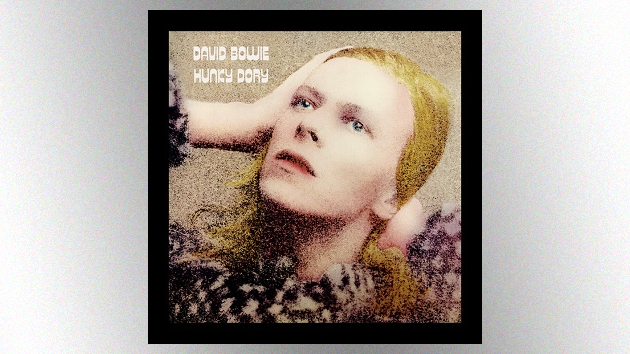 First off, a new alternative mix is being made available as a streaming single today of the classic Hunky Dory track “Changes” created by Ken Scott, who co-produced the album with Bowie. The updated song was mixed using the original multi-track recordings.

“The new version of ‘Changes’ is a fresh look at David’s classic,” says Scott. “When listening to the original multi-track I discovered a few things that I had eliminated from the original mix and also a completely different sax solo at the end. It was those things that led me to try a new mix, trying for a slightly harder, more contemporary edge to it.”

The second release is a limited-edition 50th anniversary Hunky Dory vinyl picture disc that will be available on January 7, 2002, a day before the late Bowie would’ve celebrated his 75th birthday.  The picture disc, which you can pre-order now, will feature the 2015 vinyl remaster of Hunky Dory, as well as a poster of the original version of the album’s annotated back cover image.

Meanwhile, a new lyric video for “Changes” has premiered on David’s official YouTube channel. The clip features a variety of pics from the Hunky Dory cover photo shoot, including some previously unpublished images.

Hunky Dory, which was released December 4, 1971 in the U.S., initially had little commercial success in the U.K. and the States, despite featuring such enduring songs as “Changes,” “Life on Mars?” and “Oh! You Pretty Things.”