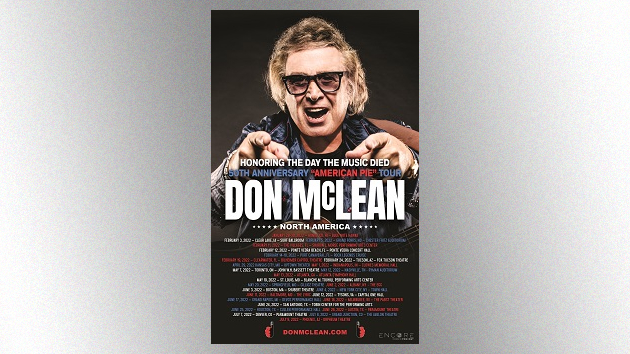 Back in October, Don McLean announced the initial dates for a 2022 U.S. tour commemorating the 50th anniversary of his classic anthem “American Pie” and his studio album of the same name. Now the singer-songwriter has unveiled about 20 additional North American shows.

“After spending the past 18 months at home, I am thrilled to be getting back on the road with my band,” says McLean in a statement. “2022 marks the 50th anniversary from when ‘American Pie’ landed at the #1 spot on the Billboard chart and we will be celebrating on tour all year long. We will be performing all the songs from the American Pie album plus many of the other hits that fans will be expecting to hear.”

As previously reported, McLean’s 2022 American Pie 50th Anniversary Tour kicks off with a three-show engagement, January 28-30, at The Blue Note club in Honolulu, and features several other U.S. concerts taking place in February.

Among the confirmed gigs is scheduled on February 3 at the historic Surf Ballroom in Clear Lake, Iowa. That of course is the venue where Buddy Holly, Ritchie Valens and The Big Bopper performed on February 3, 1959, before perishing in a plane crash later that evening. The tragic incident is now known as “The Day the Music Died,” and served as an inspiration for McLean to write “American Pie.”