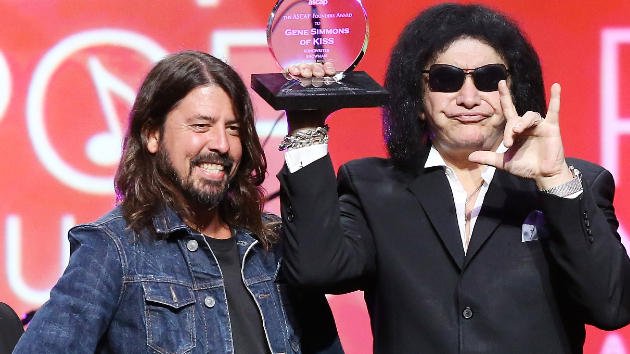 KISS‘ Gene Simmons showed up on stage while Foo Fighters were rocking and rolling all nite during a recent concert in Las Vegas.

During the show, guitarist Chris Shiflett started playing the riff to a KISS song when Dave Grohl interrupted him to reveal that Simmons was actually backstage.

“We can’t do that in front of Gene Simmons!” Grohl said. He then started begging Simmons to come on stage and show the crowd his “punim” — Yiddish for “face.” Simmons finally obliged and walked out briefly while wearing a face mask, and handed Grohl what appeared to be a dollar bill.

“I had posters of that motherf***er on my wall when I was a kid,” Grohl exclaimed as Simmons returned backstage. “Let me rephrase that — I still have posters of Gene Simmons on my f***ing wall at home.”

You can watch fan-shot footage of the interaction streaming now on YouTube.

Simmons also tweeted a video of him palling around with the Foos before the show.

Grohl, by the way, just covered KISS’ “Rock and Roll All Nite” with producer Greg Kurstin for the final night of their Hanukkah Sessions series.