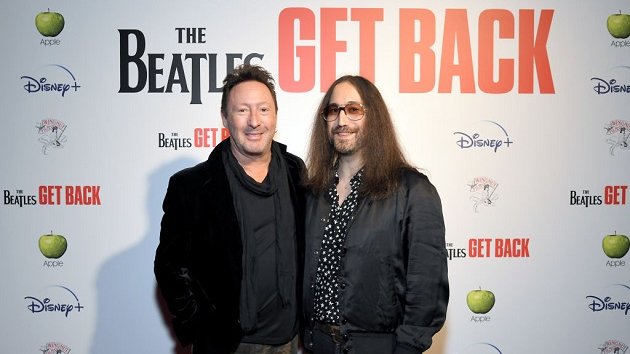 John Lennon‘s older son Julian has revealed he had an emotional reaction when he got to watch a preview of the upcoming Disney+ docuseries The Beatles: Get Back in Los Angeles this past week.

In a recent message on his Instagram that accompanied a new photo of him with his half-brother, Sean, Julian writes, “[T]he film has made me love my father again, in a way I can’t fully describe…Thank you to All who had a hand, in bringing this project to fruition…Life Changing.”

Julian also reveals that after the Get Back screening, he attended an event hosted by designer Stella McCartney, Paul McCartney‘s daughter, noting, “What an Amazing night, firstly seeing ‘Get Back’ & then Stella’s Event afterwards…The One True thing I can say about it all, is that it has made me so proud, inspired & feel more love for My/Our family, than ever before.”

It’s widely known that Julian didn’t have a close relationship with his father, who divorced his mother, Cynthia, and remarried Yoko Ono in the late 1960s when Julian was still a child.

Meanwhile, Julian posted several pictures of him with Sean Lennon — John’s son with Yoko — on Instagram, including a photo of them sitting together at the Get Back screening with Stella sitting behind them. Interestingly, he wrote in the caption of that pic, “Wish You were here Dhani & Zak!” referring to Dhani Harrison and Zak Starkey — the respective sons of George Harrison and Ringo Starr.

Another Instagram photo that Julian posted Monday shows him and Sean on a beach in Malibu, California, with the sun setting behind them. Lennon captions the pic, “A lil wind blown & tired after a few hours driving through the Mountains to the Sea, but so worth it…A Magical Day.”