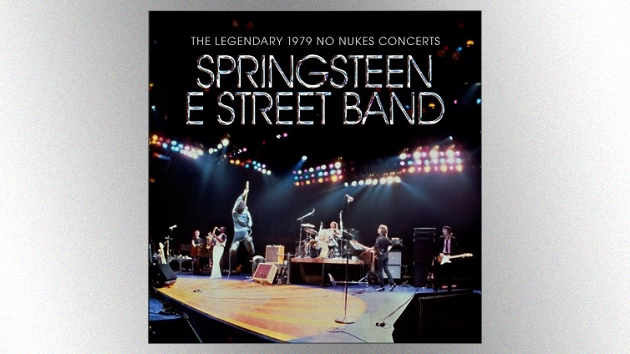 The Legendary 1979 No Nukes Concerts, an archival film and album focusing on the performances that Bruce Springsteen and his E Street Band gave during a series of historic, star-studded environmental-themed shows in New York City, got its release today on DVD, Blu-ray and audio formats.

The film and companion audio feature The Boss and his band playing 13 songs at two of the MUSE benefit concerts, aka the “No Nukes” concerts, which took place in September 1979 at Madison Square Garden. Ten of the performances are previously unreleased.

The movie was edited by longtime Springsteen collaborator Thom Zimny using the original 16-millimeter film, and the audio was remixed by lauded engineer Bob Clearmountain.

At one point, Zimny comments that it was great to see two of the E Street Band’s late members, sax player Clarence Clemons and keyboardist Danny Federici — who died in 2011 and 2008, respectively — performing so vibrantly at the concerts.

“Clarence was probably at his greatest. Danny also,” Bruce notes. “And it was just a certain peak moment in one of the many chapters of the band.”

The Legendary 1979 No Nukes Concerts is available now as a two-CD/DVD or two-CD/Blu-Ray set, a two-LP vinyl package, and on digital audio and video formats.