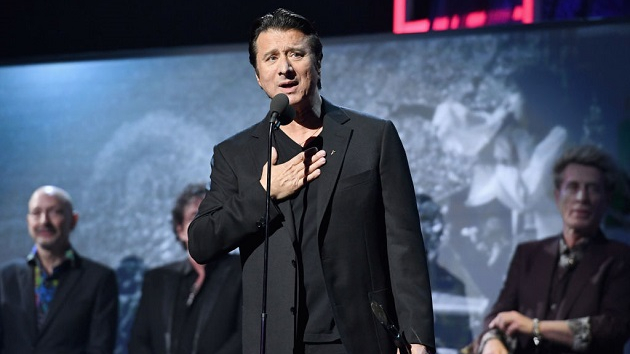 This weekend in Cleveland, it’s the Rock & Roll Hall of Fame Induction Ceremony.  And each year, there’s always a story about an artist who doesn’t want to go because they either don’t like Rock Hall, or they’re feuding with their former band mates.  Back in 2017, Steve Perry was one of those artists who wasn’t going to show up for his induction as a member of Journey…but now, looking back, he’s really glad he did.

“Yeah, it turned out to be one of the most fun things I’ve ever done,” Perry told ABC Audio. In his case, he said he was concerned because “it had been so many years and the band’s moved on.”  In addition, he didn’t want to make Journey’s current lead singer, Arnel Pineda, feel uncomfortable.

“I love Arnel and I thought, y’know, out of respect for him and just where they’d gone, I thought I would just leave it alone,” he says. “Then I had a friend of mine telling me, ‘Look, you deserve to be there — you should be there too.'”

“One thing led to another, and I went,” he recalls. “And backstage, it became clear to me what I was doing there, and what I needed to say. I sketched some stuff on a paper, and when I got out there, I pulled the paper out and said, ‘I got some things to say!'”

He laughs, “They gave us all about five to six minutes…and I thought, ‘That’s not going to cut it for me!’ So I went ahead and took the moment, and thanked everybody.”

The first person Perry thanked was ex-Journey manager Herbie Herbert, who was responsible for him joining the band.  Herbert passed away Monday at age 73.

Perry’s first Christmas album, The Season, is out November 5.