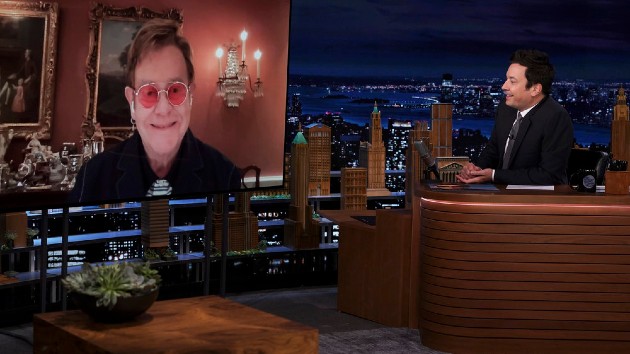 Elton John made a virtual appearance on The Tonight Show Starring Jimmy Fallon on Wednesday night and shared a couple of stories about fellow musical icons.

In one of the stories, he talked about performing with John Lennon at Madison Square Garden in 1974, which turned out to be Lennon’s last live public performance before his death in 1980.

“It was one of the most magical moments of my life,” Elton said. “Probably for me, the memory of him coming onstage and getting so much applause. I think all the band, and myself, were moved to tears. And it was such a wonderful occasion.”

At the time, Elton and Lennon had scored a #1 hit with their duet “Whatever Gets You thru the Night,” which was one of the songs they performed together at Madison Square Garden.

He also recalled the not-so-magical moment when he almost rejected a birthday surprise from Stevie Wonder. Elton was on board a private plane called the Starship and was bummed out about a performance he had.

“I went up front and sat on my own and they said, ‘Come up to the bow. We want to sing ‘Happy Birthday’ to you,’ and I went, ‘I’m not interested in my birthday,'” he recalled. “And this happened about three or four times until my publicist burst into tears and said, ‘You have to come up there. Stevie Wonder is at the organ’ — of course the plane had an organ on it — ‘and he wants to sing “Happy Birthday” to you.'”

Elton finally got to collaborate with Stevie on the song “Finish Line,” which appears on his new album, The Lockdown Sessions.