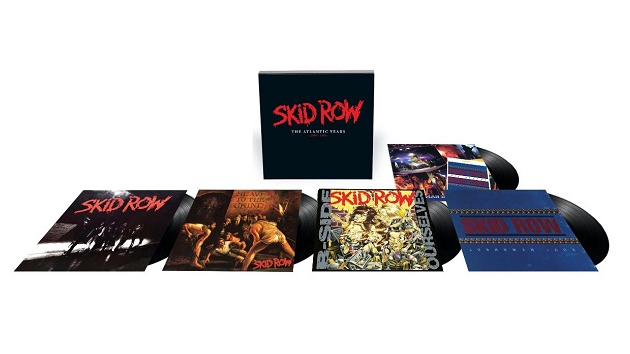 The Skid Row album features the band’s two biggest hits, “18 to Life” and “I Remember You,” which peaked at #4 and #6, respectively, on the Billboard Hot 100. The album itself reached #6 on the Billboard 200.

Slave to the Grind topped the Billboard 200 in June of ’91 and included the Mainstream Rock chart hits “Monkey Business” and “Wasted Time.”

Subhuman Race reached #35 on the Billboard 200 and features the top-30 Mainstream Rock hit “Into Another.”

B-Side Ourselves features renditions of songs by The Ramones, KISS, Judas Priest, Rush and The Jimi Hendrix Experience. The Judas Priest tune is a live cover of “Delivering the Goods” that features a guest appearance by Priest frontman Rob Halford.

Subhuman Beings on Tour!! previously was available only in Japan. The box set’s vinyl version will mark the first time that the EP has ever been issued on vinyl. Slave to the Grind and Subhuman Race will appear as two-LP sets on the vinyl collection.