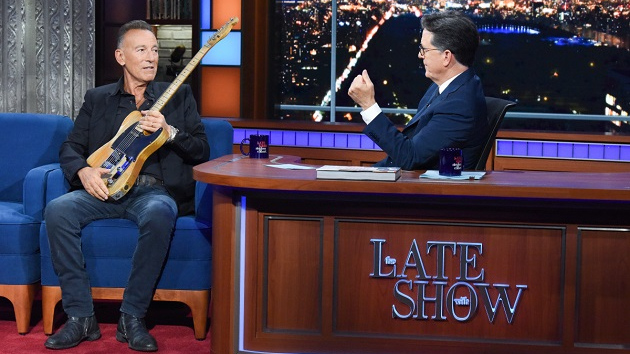 Bruce Springsteen paid a visit to CBS’ The Late Show on Wednesday, where he discussed, among other things, Renegades: Born in the USA, the book Bruce co-authored with former president Barack Obama coming out on Tuesday; and The Legendary 1979 No Nukes Concerts, a film and album documenting Springsteen’s performances with the E Street Band at the historic MUSE benefit concerts at New York’s Madison Square Garden, being released in various formats in November.

When asked how how he came to write the book with Obama, Springsteen told host Stephen Colbert, “It was the president’s idea. He called me. I thought he had the wrong number, because he’s a Columbia graduate, teacher of constitutional law, University of Chicago Law School, first African-American president of the United States,”

On the other hand, joked Springsteen, “I am a guitar player, I am a Freehold High school graduate.”

After playing a throwback clip of Bruce’s high energy performance from 1979, the Boss recalled it took place on his 30th birthday. When asked to compare that 30-year-old guy with the now 72-year-old version, he offered, “Well, it’s funny, on stage I don’t know if there’s a lot of difference… we still come out, and we take it all the way every night that we’re on stage. So, I mean, that’s a completely different person.”

Added Springsteen, “At 30, I was still a kid, and that was my entire life, what you’re viewing right there, you know…So that was different. But basically, I still feel about it the way that kid would have. That hasn’t changed at all.”

Springsteen closed out the show with a live acoustic performance of the title track from his 1979 album, The River.