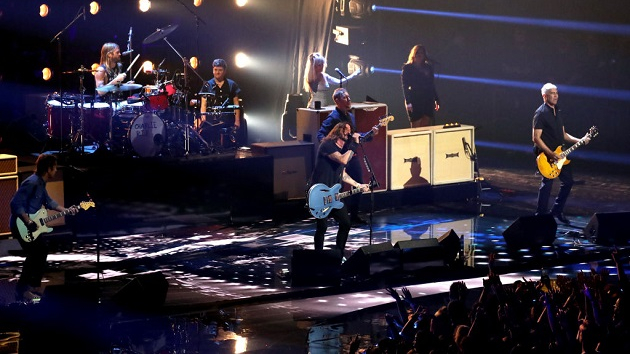 Dave Grohl appears on the cover of the latest issue of Rolling Stone, revealing a number of interesting tidbits about the Foo Fighters frontman’s past, present and future.

For one, Grohl shares that he’s playing drums on an upcoming Miley Cyrus song.

“I was going to [producer] Greg Kurstin‘s studio to deliver him a snare drum for his kid,” Grohl recalls. “He’s like, ‘Do you have five minutes? I’m trying to program drums on this new Miley Cyrus song, but I suck. Can you just, like, do a couple takes?’ So I think I’m on a new Miley Cyrus record!”

An appearance on a Miley tune would mark his second collaboration with a major pop star of late — he also drummed on a song off Halsey‘s new album, which was produced by Nine Inch Nails‘ Trent Reznor and Atticus Ross.

Nirvana and Kurt Cobain pop up throughout the interview, given the upcoming 30th anniversary of Nevermind. Speaking about Cobain, Grohl explains how his late band mate inspired the 2011 Foos song “Walk.”

“It kind of comes from the day after Kurt died,” Grohl says. “Waking up that morning and realizing, ‘Oh, s***, he’s not here anymore. I am. Like, I get to wake up and he doesn’t’…That was a big revelation to me.”

As for Foo Fighters, Rolling Stone reports that they have “vague ideas” about the direction of their next record to follow this year’s Medicine at Midnight, though nothing’s been written yet.

“Every album that we’ve made is a response to the one we made before,” Grohl says. “So now there are whispers of making an insane prog-rock record.”