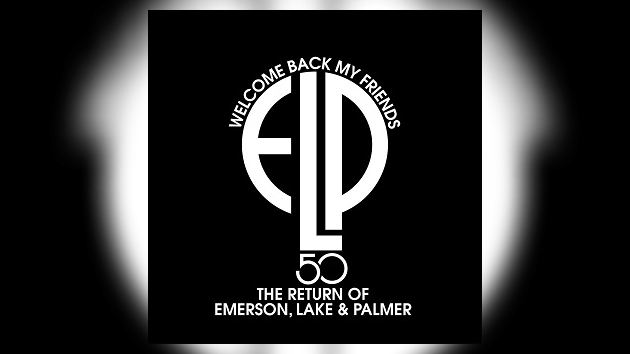 The Welcome Back My Friends: The Return of Emerson Lake & Palmer Tour is a 10-date trek that kicks off November 18 in Philadelphia and is plotted out through a December 3 show in Akron, Ohio.

Palmer tells ABC Audio the concerts will consist of 13 songs, six of which will feature high-quality footage of Emerson and Lake filmed during a pair of October 1992 ELP shows at London’s famed Royal Albert Hall projected on large screens.

Carl says of the Royal Albert Hall footage, “Wow, I was really impressed. I was impressed with the audio, ’cause the audio is absolutely superb, fantastic. Because it was all recorded individually, [it] meant I could go back and … remix it if I wanted to.”

He continues, “So, it took nine to 10 weeks of editing, and I managed to edit myself out of all the frames. I didn’t want to see me, because I’m gonna be playing on the stage, and Greg and Keith are gonna be left and right on these huge screens.”

Palmer will be joined at the shows by his current band, ELP Legacy — guitarist Paul Bielatowicz [bee-ELL-uh-TOE-vitch] and bassist/Chapman Stick player Simon Fitzpatrick — who will “reinforce some parts” on some songs with the Emerson and Lake footage, and play on all the other tunes.