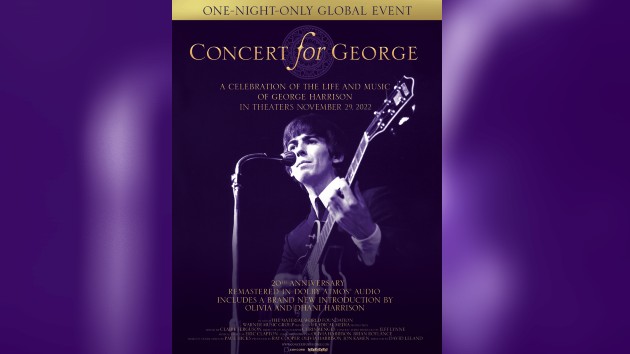 To mark its 20th anniversary, Concert for George — a 2002 concert that memorialized the late George Harrison — will screen in selected theaters worldwide for one night only.

Starting Thursday, the 2003 Concert for George album, which documented the event, is available on digital platforms in Dolby Atmos.

In a statement, George’s widow, Olivia, said that years ago, George imagined his ideal gig by saying, “I would like to have a few people who mean something to me.” She describes the Concert for George as “the most deep moving songs written by George … played with heart and soul by a core group of friends.”

She adds, “It is a joy to be able to relive that incredible evening again, on a big screen, 20 years on.”

Dhani adds, “Twenty years ago, I stood on stage beside my father’s dearest friends and celebrated his life and music. It was one of the most beautiful things we could’ve done on that day to mark his passing. There was a lot of love involved in that show, which has been preserved in this Concert for George film. I hope you dig it.”