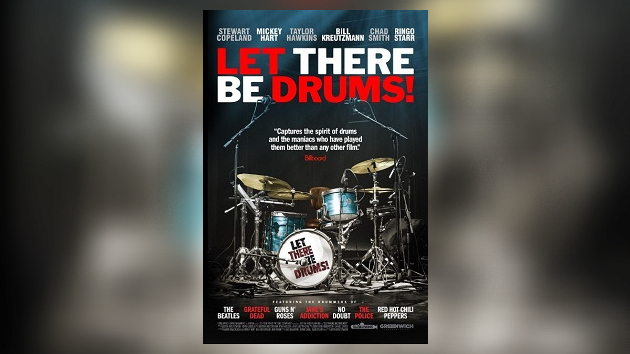 Let There Be Drums!, a new documentary starring various famous rock drummers, opened in theaters and was released digitally and on-demand on Friday.

The film was directed by Justin Kreutzmann, son founding Grateful Dead drummer Bill Kreutzmann, who’s featured in the movie and was one of its executive producers.

Justin tells ABC Audio that besides featuring various musicians sharing their stories about how they developed their passion for drumming, the doc examines the experiences of several children of well-known drummers, some of whom followed in their dad’s footsteps and others, like himself, who didn’t.

Justin says the idea to feature stories about drummers’ families came together while he was interviewing late Foo Fighters drummer Taylor Hawkins for the film.

“[Taylor] said, ‘I don’t know if this is for this documentary, but, like, how stable was your home life growing up?'” Justin notes. “And we started a dialogue, and everybody did that with me.”

Justin adds that he hopes that the documentary “works on both levels,” for music fans interested in famous drummers’ stories and for people who will appreciate the emotional family aspect.

Let There Be Drums! also will be released on DVD this Tuesday.