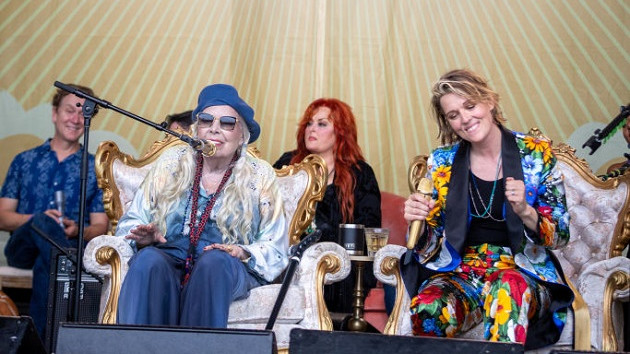 Joni Mitchell will return to the stage for her first headlining concert in over two decades as part of Brandi Carlile‘s Echoes through the Canyon concerts next year at Washington’s Gorge Amphitheatre on Friday, June 9, and Saturday, June 10.

Friday’s show will feature a headlining set from Carlile and her band, while Mitchell will host one of her “Joni Jams” on Saturday, with Carlile opening. Friday night’s opening act, and the full list of performers for the “Joni Jam,” have yet to be announced.

“No one’s been able to buy a ticket to see Joni Mitchell play in 20 years, so this is enormous,” Carlile said during an appearance on The Daily Show with Trevor Noah on Wednesday. “And she’s so excited because it’s close to Canada and some of her Canadian fans…I can’t believe it’s happening, but it’s happening and she’s going to crush it.”

Mitchell, who has rarely performed in public since suffering a brain aneurysm in 2015, joined Brandi and an all-star cast of musicians and singers — including Wynonna Judd, Marcus Mumford of Mumford and Sons, Dawes‘ Taylor Goldsmith, Lucius, Allison Russell and Shooter Jennings — at this year’s Newport Folk Festival in July.

Carlile helped organize the informal “Joni Jams” with a rotating crew of music A-listers at Mitchell’s home in Los Angeles.