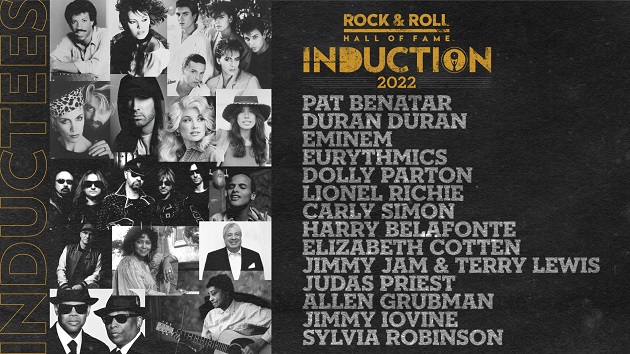 We already knew the 2022 Rock & Roll Hall of Fame Induction Ceremony is scheduled to take place November 5 in Los Angeles, but now the air date for the HBO special focusing on the event has been revealed.

The 37th annual Rock & Roll Hall of Fame Induction Ceremony will premiere Saturday, November 19, at 8 p.m. ET on the cable network and will also be available to stream on HBO Max.

The event will be held at Microsoft Theater in LA at 7 p.m. PT on November 5.

Red carpet coverage will be streamed live on the Rock Hall’s YouTube channel.

Meanwhile, an exhibit celebrating the 2022 inductees will open at the Rock Hall on November 2. Among the pieces of memorabilia on display are a coat Benatar wore in her “Invincible” video, Simon’s handwritten draft of the lyrics to “You’re So Vain,” a Fender Jazz bass that Judas Priest’s Ian Hill played on tour with the band from 1974 to 1984, an outfit Eminem wore during the Super Bowl LVI halftime Show and a Gibson Blueshawk guitar Parton played on her Backwoods Barbie tour.