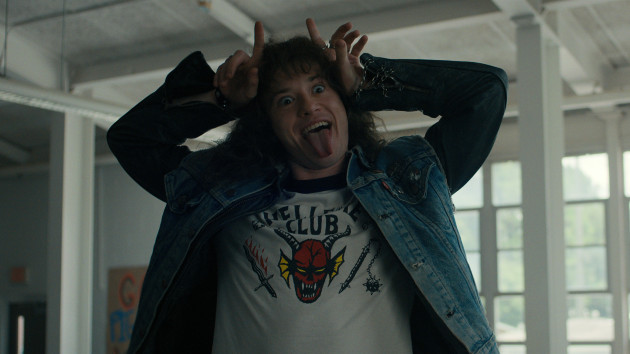 In addition to making resurgent hits out of Kate Bush‘s “Running Up That Hill” and Metallica‘s “Master of Puppets,” the latest season of Stranger Things also sparked renewed interest in Dio when beloved character Eddie Munson wore a denim jacket featuring one of the “Holy Diver” band’s back patches.

Wendy Dio, the widow of the late Ronnie James Dio, tells ABC Audio that the Stranger Things-driven Dio revival has been “really great.”

“It’s keeping Ronnie’s music and his memory alive, and now to the younger set,” Wendy says. “With Stranger Things, there’s so many people that didn’t know about Dio that want to now wear the patch.”

Wendy, who provided the patch for Stranger Things to use, shares she’s been “inundated with requests” from people hoping to buy their own since the season premiered.

“I really wish Ronnie could be here to know that these younger generation kids are now listening to his music, as well,” she says.

Along with the spot in Stranger Things, Dio’s song “Rainbow in the Dark” is featured in Marvel’s Thor: Love and Thunder film. In choosing when to allow different projects to license her husband’s music, Wendy says she’s “very protective of Ronnie’s legacy.”

“I only want to put [his music] in things that I think is something Ronnie would want to do,” she says.

You can, of course, also hear Ronnie’s music in the new documentary Dio: Dreamers Never Die, which premiered in theaters in September.

Marvel is owned by Disney, the parent company of ABC News.