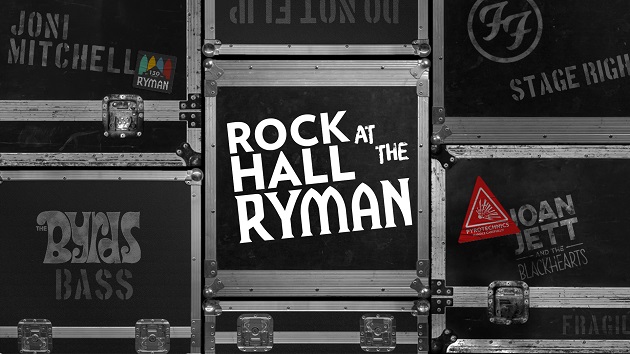 A new interactive exhibition celebrating the Rock & Roll Hall of Famers who graced the Ryman Auditorium stage over the years is set to open at the historic Nashville venue on November 2.

The Rock Hall at the Ryman exhibit is part of a multiyear partnership between the Ryman and Cleveland’s Rock & Roll Hall of Fame.

While the Ryman is one of the world’s most famous country-music venues, it’s also been the site of performances by over 100 Rock Hall inductees. The non-country artists who are acknowledged in the exhibit include Eric Clapton, Foo Fighters, Joan Jett, James Brown, The Byrds, The Who‘s Roger Daltrey, James Brown and Joni Mitchell.

The exhibit includes a display featuring Clapton’s famous “Blackie” model Fender Stratocaster guitar, which he played on tour during the 1990s; an outfit that late Foo Fighters drummer Taylor Hawkins wore during the 2013 Rock Hall ceremony while helping to induct Rush; a red latex halter bra top Jett wore during the 2006 Vans Warped Tour; and a belted suede coat Elvis Presley wore around 1970.

The Rock Hall at the Ryman exhibit will be located at the Ryman’s recently transformed 5th Avenue vestibule.

Entry into the exhibition will be included in all of Ryman’s daytime tour tickets. For more information, visit Ryman.com.

Earlier in 2022, the Ryman Auditorium was named an official Rock Hall landmark, joining 11 other famous rock-related sites around the U.S., including Austin City Limits in Austin, Texas, and the Whisky a Go Go club in West Hollywood, California.