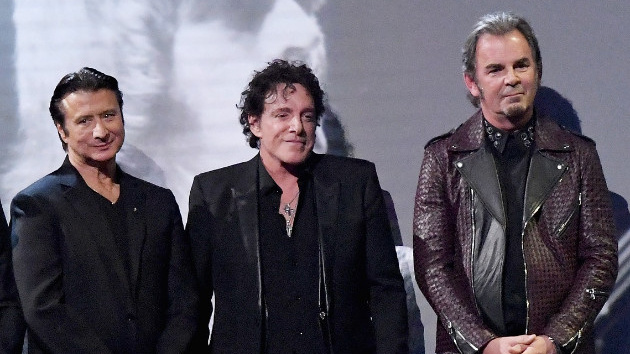 Billboard reports that Perry filed a petition at the U.S. Patent and Trademark Office on September 11, asking that 20 trademark registrations secured by the Freedom JN LLC company, which the singer says is controlled by Cain and Schon, be invalidated.

The trademarks, which include the rights to the names of such tunes as “Open Arms,” “Anyway You Want It,” “Wheel in the Sky” and others, cover the use of those titles on T-shirts, hooded sweatshirts and other merch items.

Perry claims that Cain and Schon didn’t have the right to register trademarks for the song titles without his approval because the three musicians had signed a partnership agreement requiring all of them to consent unanimously to the use of the tunes for products or other purposes.

Perry charges that Cain and Schon committed “fraud on the trademark office” by applying to register the song names without informing the agency of the true status of the ownership of the songs.

The petition also maintains that using the song titles in products would falsely suggest that he endorsed or had a connection to those items.

In addition, the petition notes that Perry, who split with Journey in 1998, was lead singer on all 20 songs in question when they were originally released and became popular, adding, “Their respective titles have become uniquely and unmistakably associated with and point to petitioner Perry.”

Billboard reports that, as of Tuesday, a lawyer for the Freedom JN company had not returned the magazine’s request for a comment about the matter.