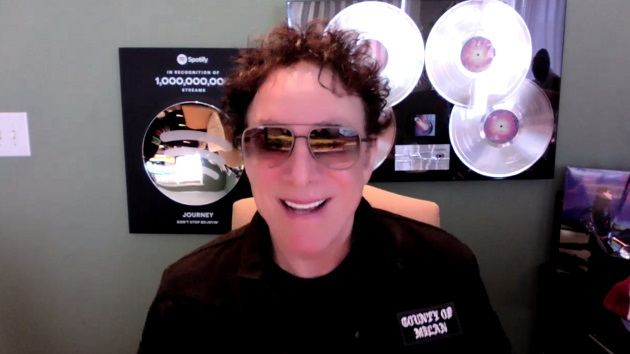 Journey guitarist Neal Schon recently shared some details about his band’s concrete and potential touring plans for 2023 and beyond during pro wrestler/rock singer Chris Jericho‘s Talk Is Jericho podcast and in a separate interview with ABC Audio.

In July, Journey announced that four North American concerts that were postponed earlier this year had been moved to March 2023 and that their Freedom Tour 2022 support act Toto would be opening the rescheduled shows.

Schon revealed to Jericho that the makeup shows will be part of a full 2023 tour leg featuring Toto that will kick off in February and will include about 40 dates.

“[W]e’re gonna do the secondary markets in the United States and do some of the main markets that we didn’t hit this last time,” Neal explained.

He added that, after taking “a little break,” Journey and Toto will head to Europe and Japan, noting that Journey would open for Toto in Europe, where the latter group is more popular.

Meanwhile, Schon revealed to ABC Audio that he hoped to schedule a series of U.S. stadium shows in late 2023 that would feature Journey, Toto and Santana.

Neal, who was a member of Santana from 1971 to 1972, noted that with 2023 marking the 50th anniversary of Journey’s formation, “it makes total sense to do something with Carlos [Santana] … because that’s where I came from before I started Journey.”

Schon told ABC Audio that he talks to Carlos multiple times a week, and revealed that Santana wants to play shows with Journey, and that the guitarists have also discussed getting together to collaborate on some new music.

“[There’s] a lot of musical history there,” Neal said. “And of course … we love playing together too.”