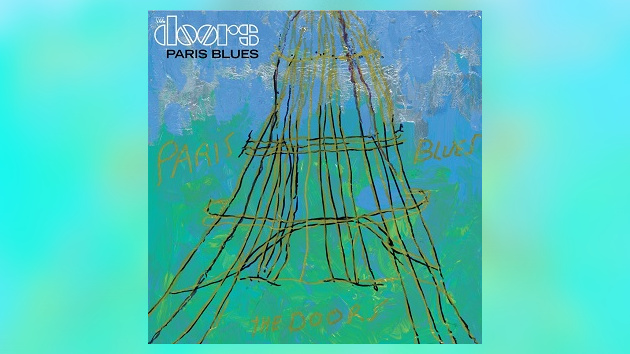 The eight-song disc, which will be pressed on blue vinyl, is a blues-themed compilation that features the title track, an original tune written by The Doors and recorded during the sessions for either The Soft Parade or L.A. Woman. The master tape of “Paris Blues” was lost, and the only recording that survived was on a tape given to Doors keyboardist Ray Manzarek, whose son Pablo partially damaged it when he was a child. The recording has been salvaged using creative editing.

The Paris Blues album also includes two previously unreleased tracks, featuring singer Jim Morrison and guitarist Robby Krieger performing as a duo at a May 1969 benefit event for author Norman Mailer‘s mayoral campaign in West Hollywood, California. The songs are a rendition of “I Will Never Be Untrue,” an original Doors tune intended for 1970’s Morrison Hotel album, and a cover of Robert Johnson‘s “Me and the Devil Blues.”

In addition, the LP contains two outtakes from The Soft Parade, “(You Need Meat) Don’t Go No Further” and “I’m Your Doctor,” which feature Manzarek on vocals. The tracks, which also include bass parts recorded in 2019 by Stone Temple Pilots‘ Robert DeLeo, were originally released as part of The Soft Parade‘s 50th anniversary reissue.

Closing out Paris Blues are a trio of blues covers from the archival Doors concert album Live in Vancouver 1970, which was released in 2010. The performances feature the band joined by blues legend Albert King. Audio of Morrison introducing King is also included.