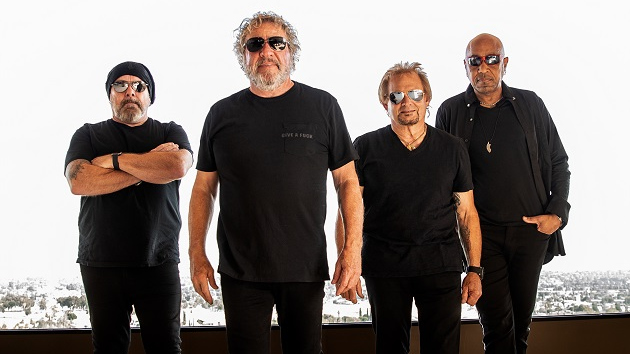 Sammy Hagar & The Circle have released a third advance track from their forthcoming studio album Crazy Times, an expanded and updated version of “Funky Feng Shui,” which first appeared on their 2021 record, Lockdown 2020.

To accompany the song, which is available now via digital formats, Hagar and his band have debuted its music video on the Red Rocker’s official YouTube channel.

The cartoonish clip features Sammy and his bandmates — bassist Michael Anthony, drummer Jason Bonham and guitarist Vic Johnson — playing the song on a Hollywood street while a giant woman in a tight-fitting red dress looms over them.

Regarding the making of the video, Hagar says, “[It] was a blast because the Director kept screaming ‘Just remember there’s gonna be a 50 foot woman stepping over you guys while you’re performing’ – ha ha! I love this song and this video is more fun than a frog in a glass of milk.”

“Funky Feng Shui” began as a jam that Hagar and The Circle would play backstage to warm up before shows. During the COVID-19 lockdown, Sammy and the band remotely recorded an abbreviated version of the tune that wound up on their Lockdown 2020 collection. Hagar completed the song while working on Crazy Times, and he and The Circle then recorded the extended version for the new album.

As previously reported, Crazy Times, which can be preordered now, will be released on CD and via digital formats on September 30, while standard black-vinyl and limited-edition red-vinyl LP versions will follow on October 28.

Prior to “Funky Feng Shui,” Hagar and the band released two other advance tunes from the album — the title track and a cover of Elvis Costello‘s “Pump It Up” — along with companion videos.