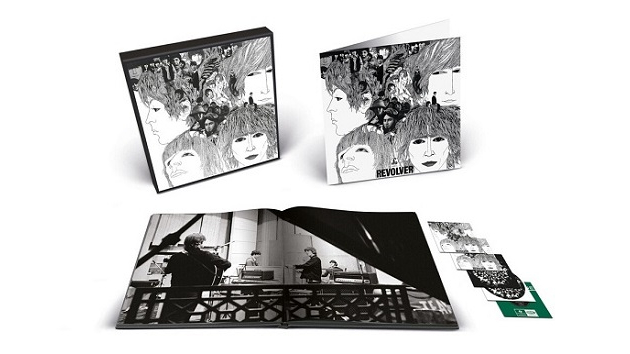 Official details have been unveiled about the deluxe reissue of The Beatles‘ classic 1966 album Revolver, which will be released in multiple configurations on October 28.

Among the versions of the reissue is a special edition that features new stereo and Dolby Atmos mixes of Revolver; the original mono mix of the album; 31 tracks of session outtakes; a four-song EP that includes the non-album tracks “Paperback Writer” and “Rain”; and a 100-page hardbound book.

The book features a foreword by Paul McCartney, an introduction by producer Giles Martin, a variety of rare photos, an essay by Questlove, track notes and commentary from Beatles historian and author Kevin Howlett and more.

Widely considered one of the greatest albums of all time, Revolver was released in August 1966 and spent multiple weeks at #1 in both the U.S. and the U.K. The album captured the band moving into the psychedelic era with its most adventurous and experimental music to date while delving into a diverse variety of genres.

Among the many highlights of the album: George Harrison‘s “Love You To,” which features traditional Indian instruments; the R&B-inspired “Got to Get You into My Life,” which was driven by a brass section; the classically influenced “Eleanor Rigby,” which features only vocals and a string section; and the mind-bending psychedelic tune “Tomorrow Never Knows.”

The special edition’s new stereo and Dolby Atmos mixes of Revolver‘s first track, “Taxman,” were released digitally Wednesday in conjunction with the announcement of the reissue, which can be preordered now.

For full details including complete track lists of the various versions of the reissue, visit TheBeatles.com.