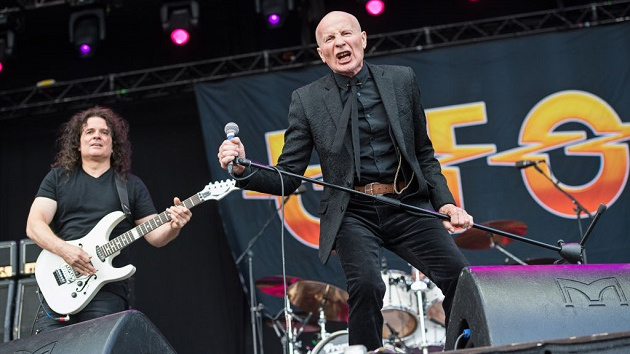 A message posted Friday on UFO’s official website announced the news, and added that Mogg “has had an operation placing stents into two arteries.”

Mogg, 74, also issued a statement that reads, “I have just got back from my doctors, and obviously asked amongst other things my resuming work, playing, touring, etc. She said most definitely not, unless you want another heart attack. So there it is, I have to go on a rehabilitation program which starts in about six weeks and lasts for six weeks. Three months more or less. I certainly didn’t want to bow out in this fashion, as I am sure you chaps didn’t.”

The band adds, “At this point in time it is absolutely unclear whether or not the dates will [be] postponed into 2023. Most important now is that Phil recovers fully. Let’s see what the future will bring. Sorry for the bad news, but it is what it is. It was a pleasure working with you all, and if we don’t meet again (for obvious reasons) I wish you all the best.”

UFO launched its farewell tour in June. The band’s final shows had been scheduled to run from an October 15 concert in Sint-Niklaas, Belgium through an October 29 performance in Athens, Greece.

Mogg co-founded UFO in 1968. The band’s most successful album in the U.S. was 1977’s Lights Out, which peaked at #23 on the Billboard 200. Their most recent studio album was the 2017 covers collection The Salentino Cuts.