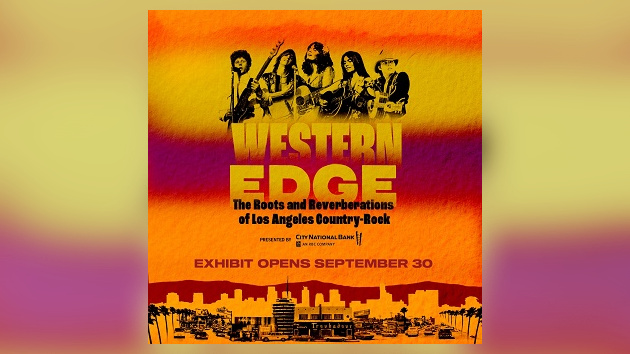 A major new exhibition called “Western Edge: The Roots and Reverberations of Los Angeles Country-Rock” will open at Nashville’s Country Music Hall of Fame and Museum on September 30.

“Western Edge” will look at the country-influenced artists who emerged from the L.A. rock scene between the 1960s and the 1980s and helped create the country-rock genre, including The Byrds, Buffalo Springfield, Gram Parsons, the Eagles and Linda Ronstadt.

To mark the arrival of the new exhibit, a series of special events are scheduled to take place at the institution from September 30 to October 2, including panel discussions, concerts, film screenings and more.

On September 30, a concert will be held at the CMA Theater that will include performances by original Byrds member Chris Hillman, founding Eagles guitarist Bernie Leadon, founding Buffalo Springfield singer/guitarist Richie Furay, Vince Gill, members of The Nitty Gritty Dirt Band and others.

On October 1, Furay will host a songwriter’s session at Ford Theater, while Hillman, Leadon, The Nitty Gritty Dirt Band’s John McEuen and others will participate in a discussion about bluegrass music’s influence on the L.A. country-rock scene at the same venue.

On October 2, the 2019 documentary Linda Ronstadt: The Sound of My Voice will be screened at Ford Theater and a reunion concert by Hillman’s post-Byrds group The Desert Rose Band will be held at CMA Theater.

The exhibit itself will feature such artifacts as stage costumes belonging to The Flying Burrito Brothers, a Fender Telecaster that Leadon played with the Eagles, a stage costume worn by The Monkees‘ Michael Nesmith and much more.

Meanwhile, a “Western Edge”-inspired playlist has debuted at Amazon Music, and a companion book will be released on September 30, coinciding with the exhibit’s opening.