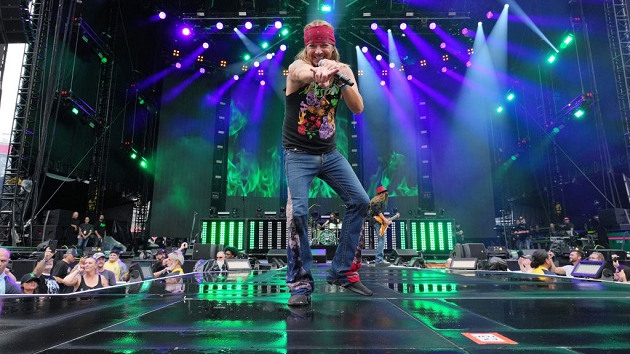 It’s been over 20 years since Poison released an album of new original songs, 2002’s Hollyweird. While frontman Bret Michaels says he’s not anxious to make another studio effort, he’d like to come up with one great new tune with the group.

“I know I could get outvoted on this,” Michaels tells the Arizona Republic. “But I said, ‘Guys, I beg you. Let’s just write a straight-up rock song.’ A ‘Nothin’ but a Good Time.’ But modern. ‘Talk Dirty to Me.’ A great guitar riff, good lyrics, a hook in the chorus. Just something that’s fun for us to write. And who knows? Maybe it could be a modern-day ‘You Shook Me All Night Long.'”

As for Poison possibly working on a longer music project, Bret says it’s probably not the best idea.
“You give us a whole album, you’ll get the best prize fight you’ve ever seen,” he says with a laugh.

Michaels says that he and his bandmates “always get along great,” except for those occasional times that they don’t.

“No one has ever made me laugh harder or been through as much as we’ve been through together, from the ground up,” Bret says. “I’m talking the basement, sump-pump water on the floor. We’re definitely four uniquely different personalities. But on that stage, it’s electric.”

He adds, “When it goes bad, it goes straight to a fistfight.”

Poison has been spending the summer on the massive Stadium Tour, which also features Def Leppard, Mötley Crüe and Joan Jett & the Blackhearts. The trek runs through a September 9 show in Las Vegas.

Michaels also has a bunch of 2022 concerts with his solo band scheduled through a November 11 gig in Ridgefield, Washington.