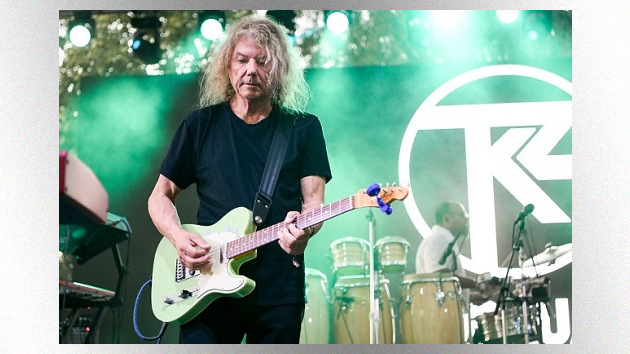 Talking Heads guitarist/keyboardist Jerry Harrison and former King Crimson guitarist/singer Adrian Belew are among the artists who have been added to the lineup of the 2022 Hardly Strictly Bluegrass festival, which takes place from September 30 to October 2 at San Francisco’s Golden Gate Park.

Harrison will be joined by Belew, who toured and recorded with Talking Heads during the early ’80s, and a group of backing musicians for a performance of the band’s classic 1980 album Remain in Light. Their set will also feature select other Talking Heads tunes, as well as songs from their respective solo careers.

Other artists confirmed to play the festival include Emmylou Harris, Marcus Mumford, Lucius and Buddy Miller. For more info about the festival, which is a free event, visit HardlyStrictlyBluegrass.com.

Ahead of their performance at the festival, Harrison and Belew will come together for a special concert and Q&A event celebrating the Remain in Light album on September 29 at the famed Los Angeles theater The Wiltern.

The show will begin with a conversation between Harrison, Belew and actress/singer Tawny Newsome about the Talking Heads’ heyday, and the group’s influence on the musical and cultural landscape. Harrison and Belew will then perform with a group of musicians that includes former members of the Brooklyn, New York-based band Turkuaz.

Tickets for the event are available now at LiveNation.com.

Harrison, Belew and members of Turkuaz previously gave a series of performances celebrating Remain in Light in 2021 and earlier this year.