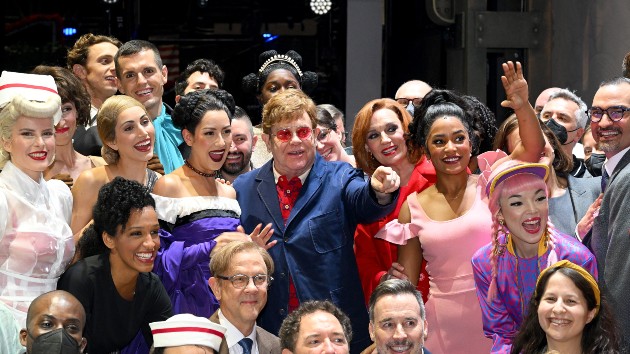 A few days ago, Elton John attended a preview performance of his new musical, The Devil Wears Prada, which is currently playing in Chicago on its way to Broadway. On Instagram, Elton told the cast and crew, “You’ve created something truly wonderful!” But at least one review doesn’t agree with him.

In its review of the show, Variety writes that the show needs to “get meaner,” calling it “an overly respectful and frankly miscalculated approach to its source materials.” According to Variety, the show, based on the book by Lauren Weisberger and the hit movie starring Meryl Streep and Anne Hathaway, “provides some serviceable entertainment but needs a hefty dose of guilty, edgy fun to boost its mild pleasures.”

In Variety’s opinion, the show “just never lets loose,” and in particular doesn’t give us enough of Prada’s iconic boss-from-hell Miranda Priestly, who in the movie and book treats her assistant Andy so terribly that we’re rooting for her to get out from under her thumb.

And while Elton’s score and its “pleasing, peppy pop sound” has “its moments,” Variety reports, “There’s a lot of work needed to replace the sincere and fairly dull songs … with songs that express the naked ambition, social irresponsibility and joyful artifice of the fashion industry.”

Variety suggests that Elton and the rest of the creative team need to “set niceness aside, and channel their inner Miranda Priestlys.”

Of course, Elton has written numerous hit musicals — The Lion King, Billy Elliott and Aida — so it’s unlikely one middling review will make much of a difference to him, though The New York Times isn’t thrilled with the show either. The musical is playing at Chicago’s James M. Nederlander Theatre through August 21.