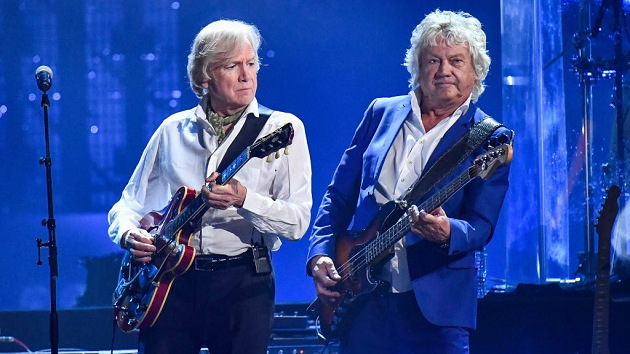 The Moody Blues‘ John Lodge and Justin Hayward haven’t performed together since the band’s tour celebrating the 50th anniversary of 1967’s Days of Future Passed album ended in November 2018, and Lodge says there are no plans for them to work together moving forward.

Since 2018, Lodge and Hayward have regularly toured as solo artists, although their respective concerts always showcase plenty of Moody Blues material.

Meanwhile, Lodge tells ABC Audio that his contact with Hayward these days only involves business matters.

As for his feelings about Hayward, Lodge notes, “We’ve had a friendship for over 50 years, so that’s not gonna change, from my point of view.”

In a Facebook post last November following the death of founding Moody Blues drummer Graeme Edge, Hayward explained that he felt the band couldn’t carry on without Edge.

Lodge recently played a one-off show with his solo group in Ocean City, New Jersey, and although he has no other confirmed concerts scheduled this year, he tells ABC Audio that he’s hoping to line up more tour dates for later in 2022.

“I told my agent when I want to go on the road, and hopefully he’s working hard at it,”Lodge says with a laugh. “It’s my life, you know? I love being on the road. I love meeting people. I love playing the music to people and getting the reaction from it. And it’s what I’ve done since I was 15.”

Hayward will kick off a two-week U.K. solo tour on September 11.