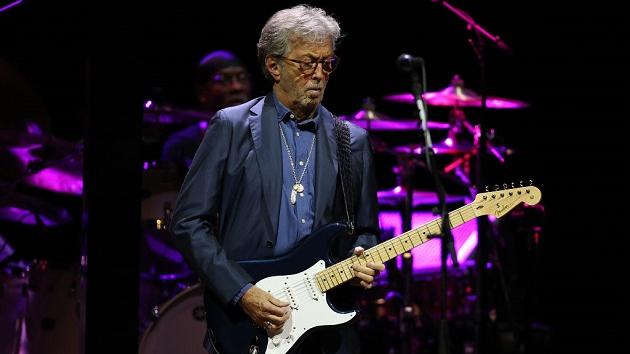 Clapton has offered no details about the tune, which was posted on July 7, but some fans and media outlets have speculated that it might be a commentary on U.K. Prime Minister Boris Johnson, who resigned that same day amid allegations of political corruption.

“Don’t you worry, don’t be blue/ Let your woman, take care of you,” Clapton sings in the first verse of the upbeat pop-blues tune. “Live your life, by the golden rule/ Pay no mind, to the pompous fool.”

Back in July 2021, Clapton posted a message criticizing Johnson after the politician announced that COVID-19 vaccine passes would be required to attend events at nightclubs and other venues in the U.K.

In the message, which appeared on the Telegram page of Clapton’s friend Robin Monotti, who identifies as a pro-vaccine-safety advocate, Clapton declared, “I will not perform on any stage where there is a discriminated audience present. Unless there is provision made for all people to attend, I reserve the right to cancel the show.”

“Pompous Fool” currently doesn’t appear to be available for purchase or via the major streaming platforms.

In May, Clapton postponed several shows on his 2022 European tour leg to October because he had contracted COVID-19. His next scheduled performances are a series of seven U.S. concerts running from a September 8 gig in Columbus, Ohio, to a September 18-19 stand in New York City. Jimmie Vaughan will be joining him at most of the shows.