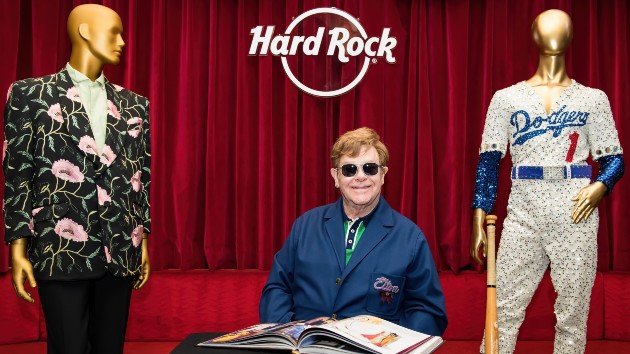 One of Elton John‘s most iconic stage outfits is the sequined and bedazzled Los Angeles Dodgers uniform he wore when he headlined Dodger Stadium for two nights in 1975. It’s been on display at the world’s first Hard Rock Cafe, at Old Park Lane in London, but now he has it back.

Elton stopped by the Hard Rock Cafe on Tuesday to do a surprise performance, a few days after performing at the BST Festival in Hyde Park. While he was there, he presented the cafe with one of the Gucci suits he’s been wearing on his Farewell Yellow Brick Road tour. In exchange, he got back the Dodger uniform — and the Hard Rock Cafe made a $100,000 donation to the Elton John AIDS Foundation.

“It’s an honour to have my Gucci suit join the Hard Rock collection and a joy to have my Dodger’s outfit once more,” Elton wrote on Instagram.

In a full-circle moment, Elton John’s three final shows in the U.S. will take place this November in Dodger Stadium. The last show, on November 20, will mark his 2,000th U.S. concert. By then, he will have performed in all 50 states.

No word on whether or not Elton plans to wear the uniform at those shows, but it’s unlikely given that, well, he’s not exactly the same size he was back in 1975. But who knows — he may use the old uniform as a guide to have a fabulous new uniform designed just for the occasion.