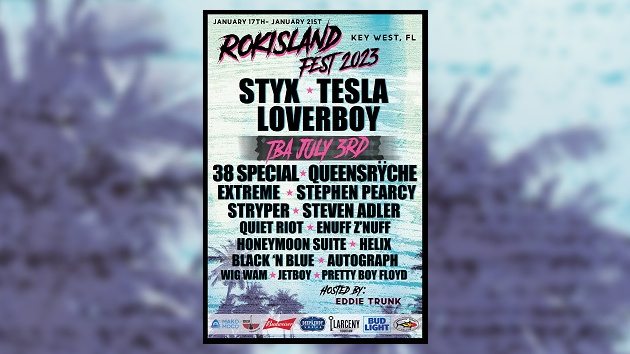 The lineup has been unveiled for the star-studded 2023 edition of the RockIsland Fest, which will take place January 17-21 in Key West, Florida.

Pre-sale passes for the five-day rock extravaganza are available now, while tickets, passes and packages will go on sale to the general public on July 6 at 10 a.m. ET.

The main venue for the event is the 4,000-seat capacity Truman Waterfront Park Amphitheater, located on the shore of the Gulf of Mexico.

“The inaugural RokIsland Fest in early 2022 brought some of the biggest rock bands on the planet to the island of Key West for four days of epic performances and tropical bliss,” says festival co-founder Dave Giencke in a statement posted by uDiscoverMusic.com. “After the overwhelming response from the artists and attendees who came in from all over the country and across the pond, we decided to add another day to RokIsland Fest 2023 with a lineup as equally stacked as year one. I’m fairly certain we’ve once again created the premier destination experience for rock fans around the world.”