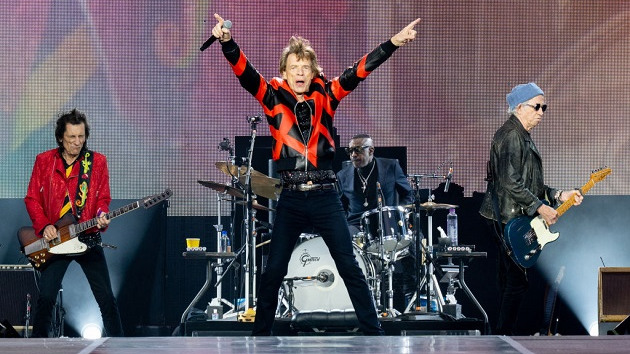 The Rolling Stones brought their SIXTY tour to Liverpool’s Anfield Stadium on Thursday, marking the first time the band played in the English city since 1971.

For their fifth song of the concert, The Rolling Stones appropriately played “I Wanna Be Your Man,” a tune written by two of Liverpool’s favorite sons — The Beatles‘ John Lennon and Paul McCartney — that also happened to be one of The Stones’ first singles.

Rolling Stone magazine reports that Mick Jagger introduced the tune during the Liverpool show by telling the crowd, “We had decided to rehearse a special version of ‘You’ll Never Walk Alone’ [the Gerry and the Pacemakers hit adopted by Liverpool’s soccer team], but we decided instead to do a cover song written by other local lads, so we’ll do this especially for you.” RollingStone.com shared fan-shot footage of the performance.

Lennon and McCartney had given “I Wanna Be Your Man” to The Stones in 1963, and in November of that year it became the band’s second single and first top-20 hit in the U.K., reaching #12 on the chart. Later that same month, The Beatles released their own version of the tune, with drummer Ringo Starr on lead vocals, on their U.K. album With The Beatles.

The last time The Rolling Stones performed “I Wanna Be Your Man” in concert was in 2012, when they dusted the song off for three shows during their 50th anniversary tour.

You can check out the full set list of The Stones’ Liverpool concert at the band’s social media pages. The show was the fifth performance of the group’s 60th anniversary trek, which kicked off June 1 in Madrid. The European outing continues Monday, June 13, in Amsterdam and runs through a July 31 concert in Stockholm, Sweden.