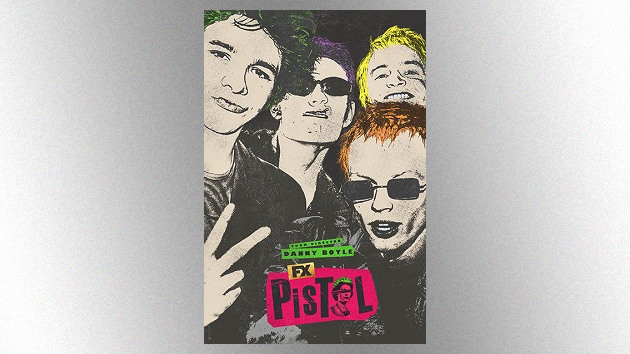 The new series Pistol, which debuted Tuesday on Hulu, is all about explosive rise and tragic fall of pioneering punk band the Sex Pistols.

Based on founding member and guitarist Steve Jones‘ memoir, Lonely Boy: Tales from a Sex Pistol, the series follows “a band of spotty, noisy, working-class kids with ‘no future,’ who shook the boring, corrupt Establishment to its core, threatened to bring down the government and changed music and culture forever.”

The groundbreaking band — which also included vocalist John Lydon, a.k.a. Johnny Rotten, drummer Paul Cook and bassist Sid Vicious, who replaced original member Glen Matlock — was very close to director and executive producer Danny Boyle‘s heart, coming along at time when he felt all the anger and disenfranchisement the band was feeding off of.

Boyle tells ABC Audio that the punk rock movement “changed so much of Britain, which desperately needed changing. And it sustained a value that surprised everyone because it looked completely self-destructive, that it was going to burn itself out in a very short period of time. But it didn’t.”

And while the Pistols’ musical talents may have been questionable, Boyle thinks it’s their message that lives on today.

Boyle notes that in a misogynistic world, punk music “allowed women to surface and to make a big contribution.” Prime examples, he says, were fashion designer Vivienne Westwood, “Queen of Punk” Jordan and Pretenders frontwoman Chrissie Hynde, who “went on to sell more records than all the rest of them put together.”