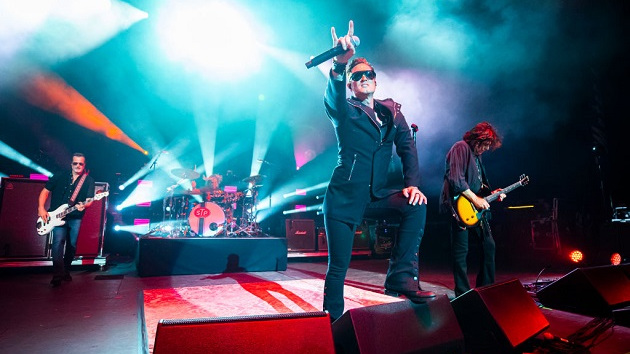 Stone Temple Pilots have canceled their performances at the last five shows of their U.S. tour with Halestorm and Black Stone Cherry because “a member of [their] touring party … tested positive” for COVID-19 during routine testing for the virus.

STP announced the news in a post on their social media sites: “Out of an abundance of caution, we must regretfully cancel the remaining shows on our tour with HALESTORM,” adding, “HALESTORM and BLACK STONE CHERRY will still be performing as scheduled.”

The five affected dates were last night’s show in Evansville, Indiana; tonight’s concert in Tulsa, Oklahoma; and performances on May 27 in Deadwood, South Dakota; May 28 in Moorhead, Minnesota; and May 30 in Missoula, Montana.

STP’s message concludes, “Thank you to everybody who has come out to see a show, and an extra special thank you to HALESTORM. We’ll be back out there as soon as we can.”

In November of last year, the band canceled the final two dates of their fall tour after someone in their organization tested positive for COVID-19, while the following month bassist Robert DeLeo announced that he had caught the virus.

Stone Temple Pilots’ next concert is scheduled for June 4 in Addison, Texas.