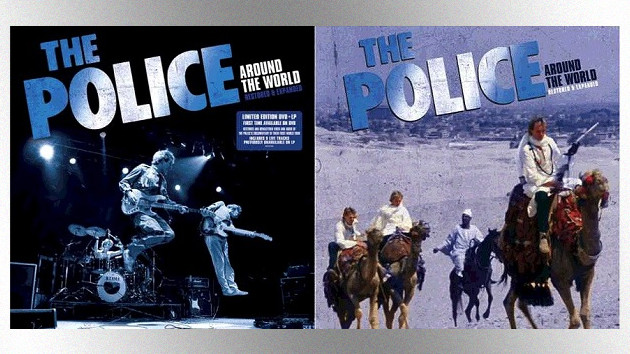 A “restored and expanded” version of The Police‘s 1982 documentary The Police: Around the World got its release today.

The film is now available on DVD and Blu-ray for the first time ever, with the new discs boasting restored video and remastered audio, plus bonus performances of four full songs.

In addition, the new release, titled The Police: Around The World Restored & Expanded, comes packaged with a newly created soundtrack album either on CD or as a colored-vinyl LP that includes performances recorded at shows in Japan, Hong Kong and the U.K. during the same world tour documented in the movie.

The film captures The Police on stage and off while touring in 1979 and 1980 in Japan, Hong Kong, Australia, India, Egypt, Greece, France, South America and the U.S.

“Well, the cool thing about this film is [it captures the band] at its hungriest, and also when the synergy was strongest,” drummer Stewart Copeland tells ABC Audio. “And combine that with the exotic locations — very colorful, very picturesque — and it’s a fun ride. Three guys having a lot of fun in strange places.”

Copeland says his favorite part of the tour was a visit to Cairo, Egypt, during which — as seen in the film — he and band mates Sting and Andy Summers hired horses and rode all around the Great Pyramids of Giza.

“That was a fun day,” Stewart recalls.

Meanwhile, Copeland notes about The Police’s performances in the movie and on the album, “We were hot as firecrackers at the time,” adding that “the excitement of that tour gave us some extra juice.”

The Police: Around the World Restored & Expanded is available as a DVD/CD set, a Blu-ray/CD package and a DVD/LP collection.

The DVD & Blu-ray feature performances of:

“Next to You”
“Walking on the Moon”
“Born in the 50’s”
“So Lonely”
“Man in a Suitcase”
“Can’t Stand Losing You”
“Bring On the Night”
“Canary in a Coalmine”
“Voices Inside My Head”
“When the World Is Running Down, You Make the Best of What’s Still Around”
“Shadows in the Rain”
“Don’t Stand So Close to Me”
“Truth Hits Everybody”
“Roxanne”