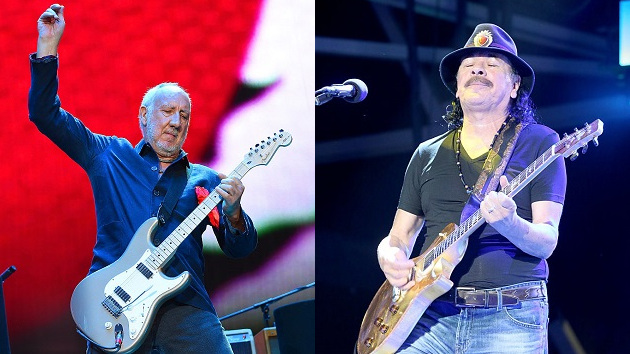 The Who‘s Pete Townshend and Santana guitarist Carlos Santana, are part of the lineup of the Audible audio service’s next Words + Music series, a program that combines music and storytelling.

The new series of programs kicks off on May 6 with Pete Townshend: Somebody Saved Me, a two-hour presentation that features the legendary Who guitarist/songwriter discussing the period between the 1978 of Who drummer Keith Moon and the 2002 passing of bassist John Entwistle.

In the episode, the 76-year-old Rock & Roll Hall of Famer reflects on the music he made with The Who and as a solo artist, his various other creative projects and endeavors, his personal relationships and more. The program also features newly recorded versions of several tunes from Pete’s catalog, including “Let My Love Open the Door,” “Slit Skirts,” “You Better You Bet,” and “Eminence Front.”

A one-minute preview clip from Somebody Saved Me has been posted on Audible’s SoundCloud page, in which Townshend notes that episode will look at a time “when The Who was at its most popular, and when The Who broke up…a time when I made solo records and worked on projects of all kinds outside rock ‘n’ roll.”

He adds, “It was a time that The Who suffered great loss, and then came together again. You could say that in this Words + Music project I’m going to focus on my ‘Middle Ages.'”

Audible · Somebody Saved Me Opening Clip