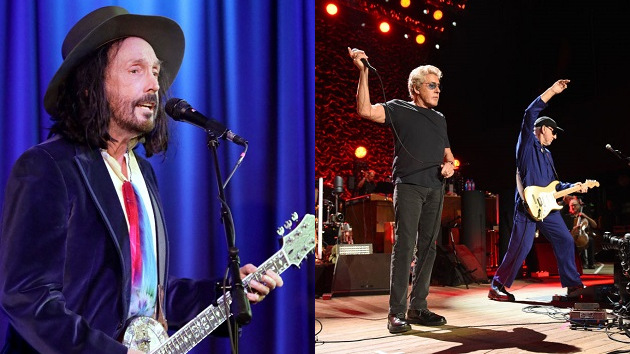 The group’s itinerary includes headlining shows at clubs and theaters, some festival appearances, and a stint supporting country star Chris Stapleton at select large venues in June and July.  But perhaps the cherry on top for Campbell and The Dirty Knobs is a recently announced series of seven concerts opening for The Who this fall.

“For me, that’s like, ‘Yeah, man, sign me up! I’m there,'” Mike tells ABC Audio about getting to perform with the British rock legends. “We’re all excited about that.”

He continues, “I’m a huge…’60s fan. The Who is one of my favorite bands, so I’m just kind of thrilled that that happened.”

Campbell cites The Who’s Pete Townshend as a major inspiration, noting, “He is one of the best riff writers and songwriters ever, and from that British mold…That’s what I grew up on was the ’60s, so it’s a big deal for The Dirty Knobs to be on that bill.”

The Dirty Knobs’ seven-show stand with The Who runs from an October 14 performance in St.Louis through a November 1 concert at the famed Hollywood Bowl in LA.

The 72-year-old Rock and Roll Hall of Famer tells ABC Audio that the Hollywood Bowl show will be poignant for him because that’s where Petty & the Heartbreakers played their last concert in September 2017, a week before Tom Petty‘s death.

“[I]t’ll be [a] kind of full circle, emotional thing to go back to the Hollywood Bowl and play, you know, opening for The Who,” Campbell says.

Check out TheDirtyKnobs.com for the band’s full schedule.