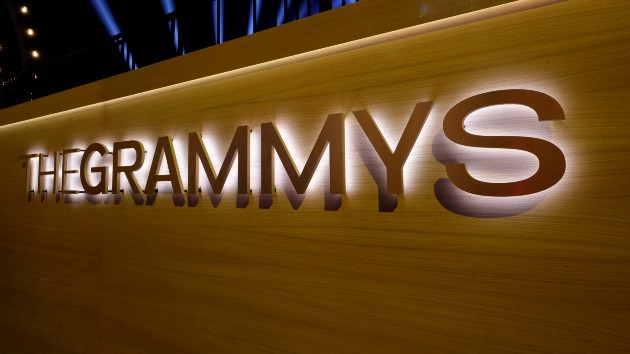 Backstage at the Grammys Sunday night in Las Vegas, artists answered questions from both reporters who were actually backstage at the MGM Grand Arena, and reporters who’d logged in on Zoom from around the country.  But some of the night’s biggest winners didn’t appear backstage.

Olivia Rodrigo and Silk Sonic, both of whom won multiple awards Sunday night, posed for photos, but didn’t talk to reporters. Doja Cat, who won Best Pop Vocal Performance by a Duo or Group for “Kiss Me More,” also declined to speak with reporters, but her duet partner, SZA, did come backstage, despite the fact that she was on crutches due to, as she put it, “falling out of bed” the day before.

“That’s the way it goes,” she laughed. “Everything awesome in my life has always come with something very random, but it just adds to the energy.”

SZA’s Grammy was her first win after 11 nominations, and R&B songstress Jazmine Sullivan and country duo Brothers Osborne were two other artists who finally won for the first time Sunday night after multiple nominations.  Backstage, Sullivan, who actually won two trophies, said, “After losing so many times, I feel like I kinda gave up [hope of ever winning]…so it’s surreal to actually hold these babies!”

TJ Osborne of Brothers Osborne, who admitted that his mother “hates” that he dyed his hair blond, spoke about how “incredibly fulfilling” it’s been to perform for their fans since he came out as gay last year.

But country’s big winner was Chris Stapleton, who took home three trophies, including Best Country Album. Asked backstage who out there he’d like to collaborate with, Stapleton, who’s worked with Taylor Swift, Adele and Santana, among others, said he wouldn’t mind working with Harry Styles.

Country superstar Carrie Underwood won the Best Roots Gospel Album Grammy for her faith-based project My Savior and cried backstage as she spoke about how it “means the world” to her that she won because she’s wanted to make that kind of album “literally my whole career.”

H.E.R., who won the Best Traditional R&B Performance Grammy, was still buzzing from her performance with Lenny Kravitz on the show.  “I was having so much fun…growing up, I’d literally study all his videos…he’s one of the reasons why I even wanted to play guitar, so having this full circle moment…I was at a loss for words.”

And The Late Show with Stephen Colbert bandleader Jon Batiste, who had the most Grammys going into the show, also cited Lenny Kravitz as HIS full circle moment: Kravitz announced that Batiste had won the Album of the Year for his project We Are. “We played together when I was 16, so it was surreal,” Batiste told reporters, adding, “Seeing Uncle Lenny up there, it was just like a whole vibe, like, ‘This is far out.'”

Foo Fighters swept the rock categories, but sadly, they didn’t attend due to the death of drummer Taylor Hawkins. St. Vincent won Best Alternative Album for Daddy’s Home and backstage, she mentioned how happy she was that Jack Antonoff, her co-producer on the album, had been named Producer of the Year.

She also spoke about how “times are changing” in terms of women in alternative rock, while rock legend Bonnie Raitt, who won the Grammy Lifetime Achievement Award, praised the new crop of young female artists, including Billie Eilish and Olivia Rodrigo.

“Across all genres, I think women are kickin’ it,” said Raitt.