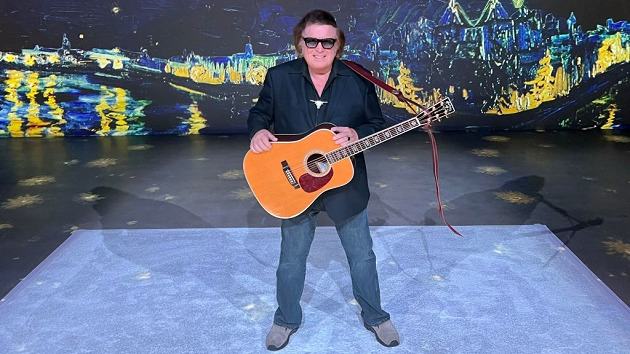 The clip features the singer/songwriter performing his song inspired by the famed Dutch painter, who struggled with mental illness before taking his own life at age 37 in 1890, as animated versions Van Gogh’s paintings are projected behind McLean.

The video — a collaboration between McLean, Immersive Van Gogh and the International Society for Bipolar Disorders (ISBD) — premiered at AmericanSongwriter.com and also can be streamed at ImmersiveVanGogh.com/don. The clip also encourages viewers to make a donation to the ISBD. Those who contribute $40 or more will receive a code to access a two-for-one coupon for a visit to an Immersive Van Gogh exhibit in one of the 14 locations where the attraction is being presented. Donations can be made by visiting ISBD.org.

“I am excited to release this video in collaboration with Immersive Van Gogh and the International Society for Bipolar Disorders,” says McLean. “Van Gogh himself struggled with mental health, and by launching this video, we hope to support mental health awareness as a tribute to Van Gogh on his birthday.”

He also notes, “This is an especially meaningful way for me to commemorate the 50th anniversary of a song that so many people have told me has a special personal resonance for them.”

Immersive Van Gogh producer Corey Ross adds, “Don McLean’s song is truly a classic. We are grateful for the opportunity to bring wider awareness and understanding about bipolar disorders thanks to this collaboration.”

“Vincent” appeared on Don’s chart-topping American Pie album and peaked at #12 on the Billboard Hot 100.