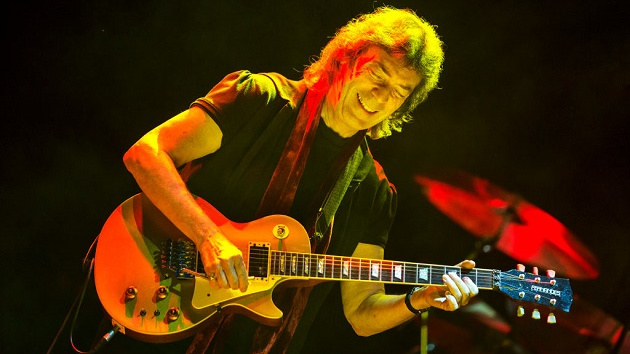 The trek, dubbed “Genesis Revisited: Seconds Out + More Tour,” is plotted out through a May 19 concert in Seattle. As the trek’s name implies, Hackett and his solo band will be performing Genesis’ 1977 live double album Seconds Out in its entirety at each show. Steve tells ABC Audio that the concerts also will feature some material from his new solo album, 2021’s Surrender of Silence, “and some old favorites as well.”

Hackett notes that Seconds Out is an album “much loved by fans,” and says about the performance, “[W]e’re doing full-length things. We’re doing all the introductions, all the ins and outs to try and give people the works.”

As for his band’s preparation for the trek, Steve says, “They’re sounding spectacular. They sound wonderful. And it’s not easy music. I won’t pretend that it is. You have to be on your mettle the whole time.”

Nine of the U.S. concerts that Hackett is playing on the tour actually are rescheduled dates from shows that were postponed in 2020 and 2021. Those concerts also will include a full performance of Genesis’ 1973 studio album Selling England by the Pound, as well as Seconds Out.

In other news, a two-CD/three-LP version of Hackett’s his 2019 concert album Genesis Revisited Band & Orchestra: Live at the Royal Festival Hall will be released on May 6.

The collection, which previously was issued as a two-CD/DVD/Blu-ray set, documents an October 2018 show in London that featured Hackett and his touring band accompanied by the 41-piece Heart of England Orchestra.