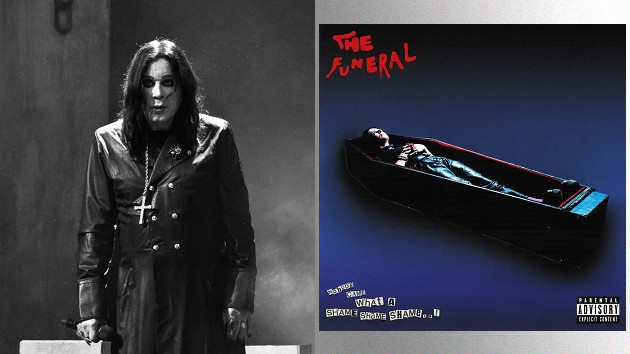 After a week of teasing, U.K. rocker Yungblud has premiered his new single, “The Funeral,” and a companion music video starring Ozzy Osbourne.

The clip, which streaming now on YouTube, begins with the Prince of Darkness in ghoulish face makeup peering over the “Fleabag” rocker laying in a coffin in an otherwise empty room. “Hang on, is this a f***ing funeral?” Ozzy asks. “Where the f*** is everybody?”

Cut to Yungblud delivering a rocking performance of the Billy Idol-esque tune in front of a moshing audience. Interspersed throughout video are scenes of Ozzy looking menacingly at Yungblud in the coffin and of the young rocker speeding around in vintage sports car.

At the end of the video, Yungblud leaves the club he was performing at and is immediately hit by a car driven by Sharon Osbourne.

“What the f*** was that?” Ozzy asks from the passenger seat, to which Sharon responds, “Just some f***ing poser.”

The metal legend then declares, “Ah, run him over again then.”

“The lyrics are literally me listing off everything I’m insecure about,” Yungblud says of “The Funeral,” which is available now via digital outlets. “If you identify with what you don’t like about yourself and own it, no one can say anything that you haven’t already said to yourself. You become bulletproof.”

He adds that the song is “about ego, death, rebirth and f***ing dancing on your grave.”