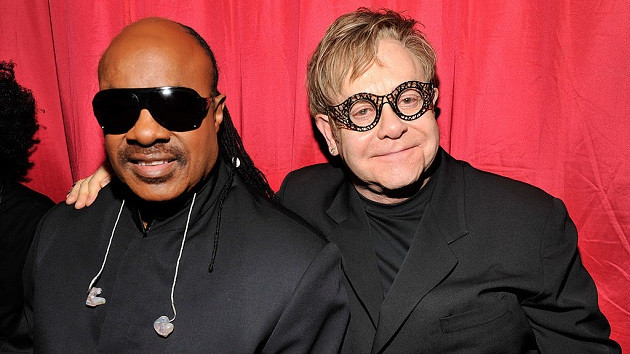 On his recent collaborative album The Lockdown Sessions, Elton John teamed up with a lot of famous artists, perhaps none more legendary than his old friend Stevie Wonder, with whom he recorded the song “Finish Line.” Now, an emotional and heartwarming music video for the tune has premiered on Elton’s official YouTube channel.

The clip, which was directed by Zack Sekuler, features a montage of vintage home movies, other footage and photos depicting or capturing pivotal moments in people’s lives, including couples with their babies, weddings, family gatherings, retirement parties and more.

The video also includes recent footage of scenes from the pandemic, including nurses and other front-line workers, and people going about their everyday lives while wearing masks. In addition, the clip boasts film clips and photos of Elton and Stevie together at various events throughout their lives, including concert performances, as well as in the music video for “That’s What Friends Are For,” their 1985 chart-topping hit that also featured Dionne Warwick and Gladys Knight.

On his official website, Elton explains that after almost 50 years of friendship, “Finish Line” marked his first-ever vocal duet with Stevie, who also played harmonica and acoustic piano on the track.

“It sounds simply incredible. Stevie sounds like he’s 19 again,” Elton says. “It was a special experience making this record with Stevie.”

Released in October 2021, The Lockdown Sessions peaked at #10 on the Billboard 200 and topped the U.K. albums chart.