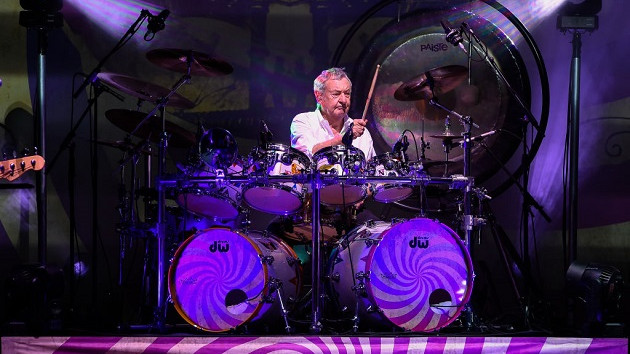 Pink Floyd drummer Nick Mason‘s current band, Nick Mason’s Saucerful of Secrets, has joined the growing list of artists who have canceled concerts in Russia in the wake of that country’s invasion of Ukraine.

A statement from Mason’s group reads, “Due to the current events happening in Ukraine, we are cancelling all of our shows in Russia that were due to take place this summer. Our thoughts and support are with all those in Ukraine.”

Saucerful of Secrets’ Russian shows had been scheduled for June 10 in St. Petersburg and June 11 in Moscow. The band’s 2022 European tour begins April 13 in Dublin, Ireland.

Earlier this week, Gilmour posted a note online that reads, “Russian soldiers, stop killing your brothers. There will be no winners in this war. My daughter-in-law is Ukrainian and my grand-daughters want to visit and know their beautiful country. Stop this before it is all destroyed. [Russian President Vladimir] Putin must go.”

To accompanying his message, Gilmour posted the animated music video for his 2015 song “In Any Tongue,” which is about the futility of war.

The Who‘s Roger Daltrey and Pete Townshend also shared their support for Ukraine, in a note posted on the band’s social media pages this week.

“We stand by the people of Ukraine at this particularly harrowing time as we will stand for all whose freedoms are violated,” Daltrey and Townshend said in a joint statement.

The message also includes a quote from late U.S. historian, playwright and philosopher Howard Zinn that reads, “There is no flag large enough to cover the shame of killing innocent people.”