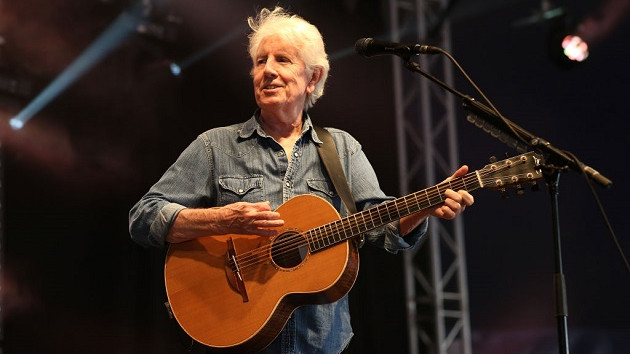 Graham Nash shares stories behind some of his most famous songs in a new episode of the Apple Music 1 podcast Deep Hidden Meaning Radio, hosted by Chic‘s Nile Rodgers, which premieres this Saturday, February 26 at 11 a.m. ET.

As revealed in a preview provided to ABC Audio, one of the tunes Graham spoke about was his classic “Teach Your Children,” which appeared on Crosby, Stills, Nash & Young‘s 1970 debut, Déjà Vu.

He explained to Rodgers that the tune was inspired by a famous 1962 Diane Arbus photograph of a boy holding a toy hand grenade in New York’s Central Park.

“[W]hen I was looking at the [photo]…I began to realize that if we didn’t teach our kids a better way of dealing with each other, then humanity itself was kind of screwed,” Nash recalls. “That was the beginning of ‘Teach Your Children.'”

Graham also revealed that in 1989, when he was selling some photo prints, including one of the Arbus photo, a tall young man introduced himself to him and told him he was the boy with the grenade, and shared his memory of his picture being taken that day.

Nash also talked about “Marrakesh Express,” the 1969 Crosby, Stills & Nash hit that he wrote. Graham explained that he first recorded the song with his previous band The Hollies, but he felt that version “absolutely sucked.”

He said that it was his CSN band mate Stephen Stills‘ guitar playing that made “Marrakesh Experess” a great song.

“When you are writing a song about a train, it needs a train,” Graham noted. “It needs urgency, it needs energy, it needs to be tracking right along. And that guitar part that Stephen Stills put on was unbelievable to me.”

The full podcast will stream for free at Apple.com.