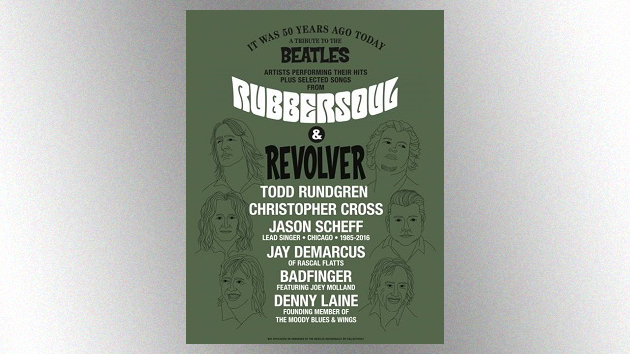 In 2019, an eclectic group of music stars took part in a U.S. tour celebrating the 50th anniversary of The Beatles‘ The White Album, and now, a similar-themed trek has been announced for this March with a lineup that includes some of the same artists.

The artists also will showcase tunes from their own respective bands or solo careers.

The trek gets underway on March 1 in Montclair, New Jersey, and currently is plotted out through a March 27 show in Kansas City, Missouri. Additional performances will be announced soon.

“This time we thought: Wouldn’t it be great if we played the best songs The Beatles ever recorded for a change?” notes Rundgren, who also took part in the 2019 tour, as did Cross, Molland and Scheff. “Rubber Soul and Revolver are the boys peaking in front of our eyes and redefining what pop music would be for the foreseeable future. This is going to be fun.”

Laine, meanwhile, says, “The Moody Blues met The BEATLES in the early ’60s and were invited to join them on their second British tour. The thought of performing some of their classic songs with such a revered cast on this tour will bring back not only those moments in time but also fond memories as a member of Wings.”

Check out a full list of confirmed tour dates at GlassOnyonPR.com.