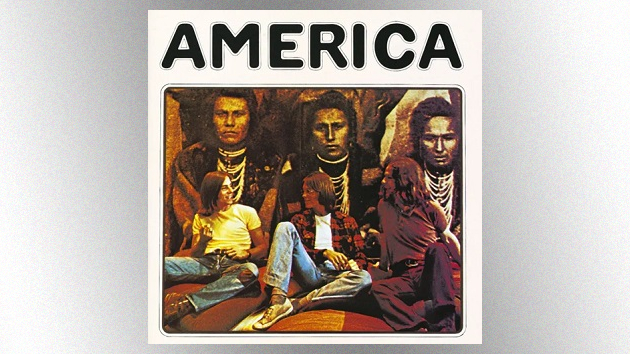 America‘s self-titled debut album was released 50 years ago this month in the U.S.

The trio of Dewey Bunnell, Gerry Beckley and Dan Peek, whose fathers were U.S. Air Force personnel stationed in the U.K., formed America after graduating from the same London high school.

All three were talented singer-songwriters who contributed multiple songs to the America album. The album was released in the U.K. in December 1971, initially without the lead single, the Bunnell-penned folk-rock classic “A Horse with No Name.”

When “A Horse with No Name” began enjoying some chart success, it was added to the U.S. version of the album. The single topped the Billboard Hot 100 for three weeks in the spring of 1972, while the album spent five straight weeks at #1 on the Billboard 200 around the same time.

Reflecting on the band’s immediate success, Beckley tells ABC Audio, “It doesn’t happen too often. We had a number-one single and album with our very first release. We’d barely been together a year. It was a rocket ship that basically burned pretty solid for almost 10 years.”

The album’s follow-up single, the Beckley-written ballad “I Need You,” also was a hit, reaching #9 on the Hot 100.

America was co-produced by Warner Bros. staff producer Ian Samwell, whom Beckley says was tasked with recording the songs simply, without much studio embellishment. Beckley also recalls that the album was recorded quickly and inexpensively, and he credits engineer Ken Scott — known for his work with David Bowie and The Beatles — for keeping the sessions going smoothly.

America was the group’s only album to top the Billboard 200, and has been certified Platinum by the RIAA for sales of one million in the U.S.